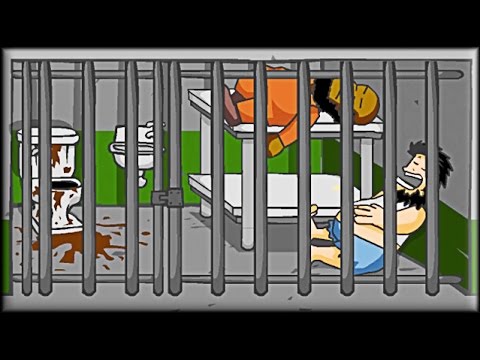 The crazy Hobo now ends up in jail because of his all-out attack in the city. But it seems he will try to escape the prison here in Hobo Prison Brawl. Control your Hobo character and eliminate all the prisoners and other people inside the prison. Perform wacky attacks by punching and kicking to defeat the bad guys. The objects around can be picked up too and throw them at the enemies. When you finish another area, a new move will be unlocked for you. There will be certain passwords that will be given to you and can help you enter checkpoints.

Hobo is sent to jail after the events of the first game. Apparently his rampage in the dump site and in the streets led him being in jail which is of course natural. Apparently the prison guards as well as his fellow inmates aren’t too fond of Hobo being inside. The game begins with Hobo sleeping as usual and his cellmate smacks him in the face for ruining the toilet. Hobo takes offense to this and takes out his cellmate as well as fighting the other prisoners and guards inside as he goes on into another rampage.

Much like the first game, Hobo 2 utilizes hand drawn animations depicting a cartoonish display. They use the same art style as well which is fine as it represents a comical and enjoyable feature. You do have to prepare yourself as the game still contains the blood and other disgusting aspects that may not make you enjoy the game. Just to give you an insight, you also get a couple of poop and miss mixed into the fray. The music is still the same having that jazzy and whimsical tune to it while having sound effects that sounds like something from a kid’s cartoon.

Hobo 2 much like the first game where it is a 2D beat em up game. The concept of a beat em up game is to beat up all the enemies in the screen while staying alive. In the game, the players control Hobo making him go up and down as well as either left to right so that he can fight the enemies in the game. The enemies consist of the basic inmates, the guards as well as vehicles. The final boss fight is in fact against a police van with a number of police cars. The players can make Hobo punch, kick and do a variety of combos. Hobo’s combos consist of him using his bodily fluids and wastes. Hobo likes to use his spit, pee or poop on the enemies. While it seems a bit disgusting, Hobo can actually stun or slow down his enemies depending on what you would use on them. Every time the players pass through a level of the game they are given a password that they can use to return to that point in case they get killed in the level. They can also start off at that point should they wish to play the game at a different time and that was where they left off. Then again you can just look up the passwords online to start wherever you would want. You would also get the combos unlocked on the previous level when inputting the password. The game is arguably challenging but it represents classic 2D beat em games back in the day. The final fight as we stated is a storm of policemen inside a van. The game ends with Hobo sleeping as always but he’s now wanted so this leads to the next game.